The word Whisky comes from the Celtic peoples definition of drink called Ulgesbeatha later known as Usquebaugh meaning the water of life!  "To fervere" is latin for "to Boil."  The first know distillation vessels were found in India.  There could be argument to say that distilling is the first stepping stone to modern day chemistry.  Acetic acid would then be the first deliberate acid created by man.  Although man has been making alcohol for many thousands of years it was not until the 17th Century before alchemists understood the chemical properties that went on during fermentation. 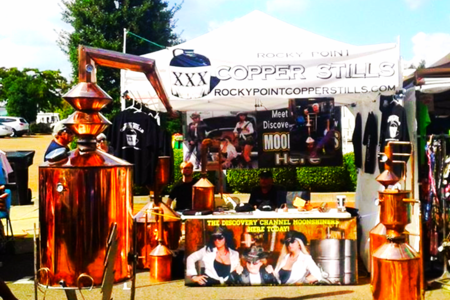 watch us on PBS! A Craftman's Legacy with Eric Gorges.​

Old Whiskies were first made with malted barley and other grains were added to the grain bill over time.  The enzymes in the malted barley change the starches in the grains to maltose sugar which is then ready for the yeast to ferment.

Born out of our love of Whiskey, RockyPoint Copper Stills has become the premiere location for fine Copper Distilling Units. After traveling the south and examining the varieties of stills that were made over the last couple of centuries, we have progressively grown to become one of the best Copper Distiller building manufacturers in the country.

Our biggest challenge was finding the right, high-quality parts for the stills we wanted to build. Hence, our seeds were planted for building a reputation for quality. We are dedicated to offering only the finest and most efficient copper moonshine and spirit distilling products. We have also taken great care in assembling a team of only the best craftsmen and support staff.

Come and taste the experience for yourself!

"There ain't no substitute for the best Kentucky Whiskey.  White Lightning should not be made of inferior ingredients and masked with fruity flavor. It is wise to use the finest ingredients at all times and to waist nothing."

The word Whisky comes form spirits made in England, Scotland, Ireland, or Canada. The word Whiskey is denoted as being distilled in the United States. Whiskey is distilled wash drawn from a mixture called mash, beer, or wine.  The mash usually contains a grain mixture called a grain bill, that is added to water, sugar, and yeast. The wash should be bitter sweet tasting if it is good.

​The wash is added to a distilling vessel and heated to around 175 degrees F to begin separation of alcohol from water and other ingredients within the vessel.  The patent still was created in 1831 by Aenias Coffee an Englishman. The Patent Still consists of two columns called a rectifier and analyzer columns. It was very good at stripping the alcohol, but a traditional pot still does a better job of making whiskey! ​​